E-girls PERFECT LIVE 2011▶2020 is the fifth and last concert tour of E-girls, and their second arena tour. It was scheduled to happen from February 1 to July 4, 2020 but, due to the COVID-19 pandemic, the tour ended on February 22 and the rest of the tour was cancelled.

The tour is part of LDH PERFECT YEAR 2020 and is described as a best tour which include their hit singles.

On November 14, 2019, it was announced that Happiness and Sudannayuzuyully would be appearing as additional acts of the tour.

On November 17, 2019, it was announced that the group Girls² would be participating of the tour as opening act.[1]

On December 22, 2019, with the announcement of E-girls' disbandment, it was revealed that this tour will be the last of the group.[2]

On January 28, 2020, it was announced that LDH Presents THE GIRLS AUDITION winner Yokoi Rui, and finalists Yamashita Yuna and Sato Hinata would be participating of the tour as part of the opening act.[3]

On February 1, during the first concert of the tour, it was announced that Yokoi Rui, and Yamashita Yuna and Sato Hinata would become members of LDH's new unit named iScream.[4]

On March 6, an update on LDH and E-girls' related websites announced that the March 14, 15 and 20 concerts were also postponed.[7]

On April 8, it was announced that all scheduled concerts in May would be cancelled with a possibility of reschedule.[10]

On May 23, it was announced that all scheduled concerts between June 1 to July 20 would be cancelled with a possibility of reschedule.[11]

On June 10, it was revealed that after discussions with LDH's coronavirus specialist team, they stated that it is very difficult to hold the concerts with 100% of the audience attendance following the current state of the COVID-19 pandemic in the country. Due to this, all scheduled concerts from February 26 to December 26 were cancelled, therefore finishing the tour. All tickets from the cancelled shows will be refunded.[12] 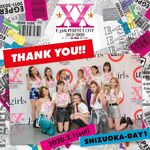 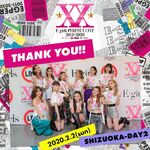 February 2
Add a photo to this gallery

Retrieved from "https://ldh-girls.fandom.com/wiki/E-girls_PERFECT_LIVE_2011▶2020?oldid=17842"
Community content is available under CC-BY-SA unless otherwise noted.