Hanayama Mizuki (花山瑞貴) is a former performer, former member of E-girls and former trainee of Bunnies and Rabbits.

In 2011, she was chosen through the nationwide audition process EXILE Presents VOCAL BATTLE AUDITION 3 ~For Girls~ to be a member of bunny.

In 2012, she joined E-girls. She then left the group after the release of their third single "Follow Me" and was demoted to trainee level as part of Bunnies. In 2014, she was moved from Bunnies to Rabbits.

In 2016, Hanayama was not part of the Rabbits' line-up anymore. 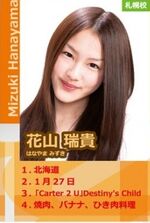 Hanayama Mizuki as a member of Bunnies (August 2013) 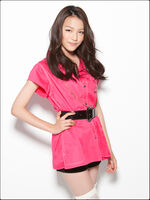 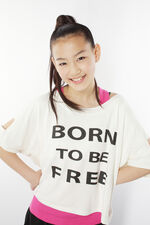 Hanayama Mizuki (2011)
Add a photo to this gallery

Retrieved from "https://ldh-girls.fandom.com/wiki/Hanayama_Mizuki?oldid=18925"
Community content is available under CC-BY-SA unless otherwise noted.