Rabbits was a trainee group under management of EXPG (EXILE PROFESSIONAL GYM). The group was announced in January 27, 2015 with the announcement of the E-girls Pyramid. All of the members are of high school age or older, while the other unit, Bunnies, is composed by members of junior high school age or younger.

Rabbits and Bunnies undergo a series of reviews configured annually.[1][2][3][4] Members who get qualified as a performer gets to join the E-girls line-up.

With the discontinuation of the E-girls Pyramid in June 2017, Rabbits (and Bunnies) became EXPG Lab, where EXPG students are selected and put into dance teams and a vocal unit, with occasional lineup changes. 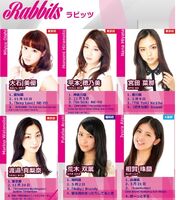 Retrieved from "https://ldh-girls.fandom.com/wiki/Rabbits?oldid=18251"
Community content is available under CC-BY-SA unless otherwise noted.